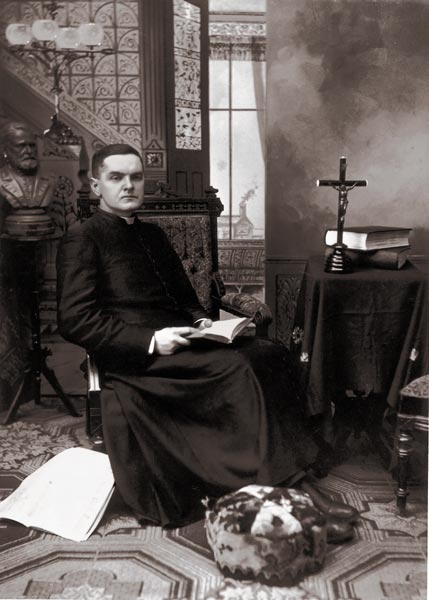 Born in Waterbury, to Irish immigrant parents, Fr. Michael J. McGivney grew up at a time when millions of Catholic immigrants — and their children — were struggling to overcome poverty and anti-Catholic prejudice.

McGivney knew well the tenuous realities of life in the immigrant community. He worked in a spoon factory as a youth before entering the seminary. While studying for the priesthood, his father died suddenly, and Michael was only able to continue his seminary studies thanks to the financial support of the bishop of Hartford. Later, as a young parish priest, he observed how, throughout the immigrant community, families could be split apart and devastated by the untimely death of a breadwinner. The tragedies he witnessed in his own life and his experiences as a priest had a deep effect on him and led him to found the Knights of Columbus.

Begun in the basement of St. Mary’s parish in New Haven in 1882, the Knights of Columbus today has more than 1.8 million members organized in 15,000 councils throughout North and Central America, the Philippines, the Caribbean and Eastern Europe. With charity as their first principle, Knights donated more than $170 million and more than 70.5 million hours to charitable causes last year alone.

At a time when Catholics in general and Catholic immigrants in particular lived on the margins of society in the United States, Father McGivney saw the opportunity to bring the men of his parish together to strengthen their faith, to reach out in charity to those in need, and to protect the future of their families. His work anticipated in many ways the coalescence of the Church’s social teaching beginning with Rerum Novarum, the emphasis on the Catholic laity in the teaching of the Second Vatican Council, and the pontificate of St. John Paul II, the emphasis on charity in the encyclicals of Pope Benedict XVI and the charitable witness and promotion of a the Catholic understanding of fraternity by Pope Francis.

McGivney chose Christopher Columbus as the organization’s namesake because Columbus was one of the few Catholics celebrated as a hero of American history by 19th century Protestants in the United States.